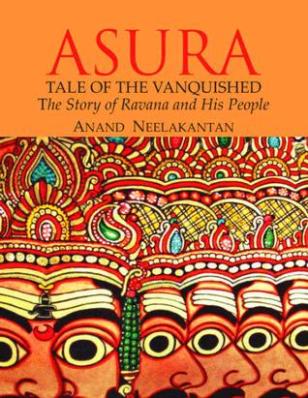 Ramayana was first told to me by my mom at home. later it was part of syllabus at school. Rama was introduced as a avataram. if I remember right, there was so much debate about liking Lord Rama as he kept agni parkisha for his wife and sent her for vanavas.talking about Ravana, the image what is printed in everybody’s mind is his ten heads and the person who abducted Sita .Somehow I also got reminded of the movie RAVAAN. yes, Where Vikram is Robin-hood  for his village. though he is good, because of his anger against the awful policemen and his sister’s death makes him an antagonist.

Talking about this book, it is different, for first time  somebody has taken courage to depict an antagonist as main protagonist, write a book on Ravana. did I call it courage? yes, as I think this book would bring in lots of criticism , yet the author has brought in subtleness in not hurting the sentiments of people who believe Ramayana to be true. I loved the whole new perspective of the book, a fresh thinking, nice imagination.

The book starts off with Ravana saying, “For thousands of years, I have been vilified and my death is celebrated year after year in every corner of India. Why? Was it because I challenged the Gods for the sake of my daughter? Was it because I freed a race from the yoke of caste-based Deva rule? You have heard the victor’s tale, the Ramayana. Now hear the Ravanayana, for I am Ravana, the Asura, and my story is the tale of the vanquished.”

In this book author talks about so many new aspects, like comparing Aryan and Dravidian to Asura and Devas. Just not that, he also reveals the fact that there were so many evil things happening from then, namely caste system, various rituals. Ravana tries to fight against them. The asuras, believe in equality; their women are free to make their own decisions and merit is the cornerstone of political and social power. This difference in thinking brings in war between Devas and Asura.

It was a pleasure to see few illustrations given in the book . Book is indeed a page turner. Little big to carry while travelling. The coverage design is bright and clean. All in all for me this book is a brave attempt.

Anand Neelakantan is a talented narrator from India. Asura: The Tale of the Vanquished is Neelakantan’s debut novel. He is currently working on another mythological tale that details the Kaurava’s version of the Mahabharata. He has a few satirical short stories to his credit.

Born in Kerala, Anand has been fascinated with mythology since his childhood. He is married to Aparna, and has two children, Abhinav and Ananya. Besides writing, Anand enjoys oil painting, reading, and drawing cartoons.

Thank You Leadstart Publishing Pvt Ltd for sending me this book for review.

This book is written in 90’s time frame, when there were series of blast and communal riots in Mumbai.The book is more about diversity. It talks about culture, religion, politics. Three girls, from different cultural background come together to study in Gyaan Sakthi college, Mumbai. The main Characters are Shalini, Bhagu,Binaifer and Louella.

Binaifer and louella are school friends, who come together to the college and meet the third girl Shalini Dyal. Shalini start liking her classmate Bhagu. other two girls try to unite them like another friends. should i call it as three idiots female version??

Bhagu fights against the canteen-wala who malpractices by mixing water to milk and compromises the food quality and quantity to make money. little does he know that canteen-wala is a goonda. he gets beaten up by them, and when he recovers, new heroism is born in him. ( like how Rajinikanth become rich in just a song) .

Meanwhile Shalini’s grandma Mem, a traditional controlling person, finds a perfect match for Shalini. Shalini tries to convince Bhagu to elope as her parents would never let her marry a jobless Student. Shalini moves back to Jaipur. Bhagu gets involved in a upcoming political party. later they get united in perfect Bollywood style.

I liked the way in which the story gradually shifts from the college fun , romance to communal riots to Bhagu getting involved in politics.

I found the book to be slow paced. Somewhere  or the other, there is a connectivity problem with readers. I wishes the author had detailed more on what these people did in college other than spending time in canteen. thought their emotions, confusion which are depicted it lacked clarity. All in all, the book is mixed bag of emotions.

Born and brought up in Mumbai, K. Mathur lives with her family in New Zealand.

Mathur showcases her unique perspective into her city’s psyche in Never Mind Yaar.

“I’ve always enjoyed my city except when violence has erupted between communities. On the whole people seem to get along fine. We are proud of our own community but accept that others are proud of theirs. The food we eat, the clothes we wear and the languages and dialects we converse in are diverse and most of us say vive la difference. But there’s a handful in every community who are extremely suspicious of those differences.”

“Why is secularism or a different way of doing things such a threat to these people? This issue has disturbed me since the 1980s when I witnessed communal riots in Mumbai. I felt compelled to talk about it in Never Mind Yaar. But first and foremost, the book is a love story and a story of friendship and fun between three young girls from different backgrounds – Hindu, Parsi and Christian – who meet at college.”

This review is a part of the biggest Book Review Program for Indian Bloggers. Participate now to get free books!